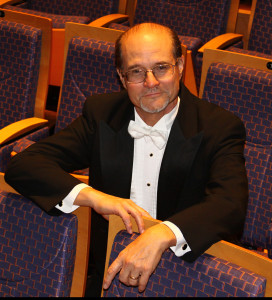 Beginning his career in the symphonic concert hall, he has performed with such orchestras as the Antwerp Philharmonic, Monte Carlo Symphony, Israel Sinfonietta and in Italy with the Accademia di Santa Cecilia in Rome, Orchestra of the Maggio Musicale Fiorentino and the radio orchestras of Rome, Naples and Turin. In North America, he has conducted the Baltimore Symphony, Chautauqua Symphony, Seattle Symphony, New World Symphony, Orchestra of Illinois, Philharmonic Orchestra of Florida and at the Spoleto Festival, U.S.A. He served as Music Director of the Virginia Chamber Orchestra from 1993-1998.

Mr. Kellogg attained international attention as the first-prize winner of the Gino Marinuzzi Conducting Competition and as a co-winner of the Guido Cantelli Conducting Competition. He made his operatic debut with the Rome Opera leading a production of Nino Rota’s Aladino e la Lampada Magica and New York City Opera debut conducting Gian Carlo Menotti’s The Saint of Bleeker Street, both at the request of the composers. The Menotti opera was featured on the PBS series Live from Lincoln Center. He earned a diploma in conducting from the Conservatorio di Musica S. Cecilia in Rome under the guidance of the legendary Franco Ferrara, and also earned diplomas in composition and bassoon. Mr. Kellogg lives in Phoenix, Arizona with his wife Jamie and their sons Mark and Sean.